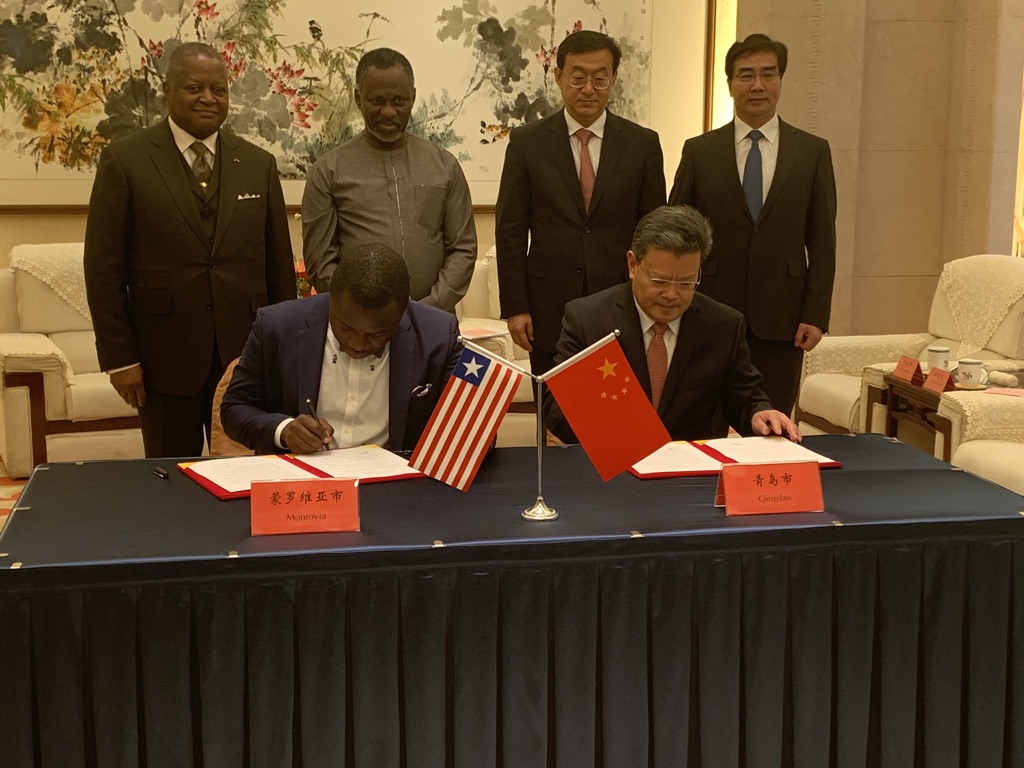 QINGDAO, CHINA – The Monrovia City Government and the Municipal Government of Qingdao have signed a Memorandum of Understanding (MoU) to establish a sister-city relationship, the Liberian Embassy in China says.

The agreement will further enhance friendship and cooperation between the two metropolitan cities in Liberia and the People’s Republic of China.

Mayor Koijee and Meng exchange handshake after the signing ceremony

The volume of trade between the Chinese port city and Liberia is said to have exceeded US$20 million in 2018.

According to a dispatch from the Liberian Embassy near Beijing on Thursday, May 2, 2019, Monrovia City Lord Mayor, Mr. Jefferson Koijee, signed on behalf of the Monrovia City Government, while Qingdao’s Mayor, Mr. Meng Fanli, signed for the Qingdao Municipal Government.

The ceremony took place in the port city of Qingdao, Shandong Province earlier this week.

The two mayors agreed to make concerted efforts aimed at promoting mutually beneficial cooperation in the areas of the economy and trade, science and technology, culture, education, and people-to-people exchanges, among others, particularly in key areas as the port (the two being port cities), economy and trade, and training.

They also agreed to organize high-level visits and participate in important events in each other’s city to forge efficient and pragmatic cooperation, while officials and related departments from both sides will communicate on a regular basis, consult and discuss on bilateral exchanges and cooperation as well as other matters of mutual interests.

Welcoming the Liberian delegation to Qingdao, the mayor, Mr. Meng Fanli highlighted the close cooperation already existing between both cities in the areas of trade, investment, marine shipping activities, among others, noting that figures for 2018 showed that the trade volume between the port city and Liberia exceeded US$20 million.

Mr. Meng, also Vice Secretary of the Chinese Communist Party (CPC) Qingdao Committee, indicated that since his country rolled out the Belt and Road Initiative a few years ago, his city has placed a lot of attention on enhancing trade and investment cooperation with countries in Europe, Asia and Africa.

He hoped that the new sister-city relationship established will be further enhanced to promote trade and investment opportunities between both countries in general.

Responding, the head of the Liberian delegation, the Minister of State for Presidential Affairs, Mr. Nathaniel Farlo McGill, reiterated Liberia’s commitment to the “One-China Policy” and that government will ensure that its relationship with China will grow from strength to strength.

He stressed the importance of establishing a sister-city relationship between Qingdao and Monrovia which will further boost economic and trade relations; signaling out Mr. Yao Cunzhi, a son of Qingdao, who’s company, Zhonghui Taifu Investment Co., Ltd., is investing significantly in the Liberian economy.

Mr. McGill said establishing this relationship will be a big opening for the Liberian economy and noted that the government of President George Manneh Weah is interested in making sure that the relationship between both countries is further strengthened. He stressed that the occasion is an opportunity for most Liberians who want to do business in China and vise-versa.

He used the occasion to disclose that government is exploring plans about opening a Consulate in Qingdao, considering the increasing volume of trade between China and Liberia and Mr. Yao, referred to as Liberia’s envoy to Qingdao, is assisting that effort working with the Liberian Embassy near Beijing, and the Liberian and Chinese Foreign Ministries.

Mr. Meng, welcomed the idea and promised his full support to ensuring that this plan becomes a reality.

Speaking later, Monrovia City Mayor Koijee said he attaches serious importance to the relationship because it will benefit citizens of both cities. He extended his deepest appreciation on behalf of the people of the city of Monrovia.

Liberia’s Ambassador to China, His Excellency Mr. Dudley McKinley Thomas, in an interview later, stressed that the signing of the Memorandum of Understanding is another building block in strengthening cooperation and working together for the shared future that is “win-win” for Liberia and China.

He said the exercise will go a long way in setting up a new platform for cooperation in keeping with the goals of the Forum on China-Africa Cooperation as well as with Liberia’s participation in the Belt and Road Initiative which calls for people-to-people exchanges and cooperation so that both countries can build a shared future which is mutually beneficial to both countries.

Qingdao, formerly spelled Tsingtao, is a city on the west shore of the Pacific Ocean. Lying on the southern coast of China’s Shandong Peninsula, the city faces the Yellow Sea to the south and east, and borders inland areas of Shandong Province to the north and west.

The city has a population of 10.3 million and has jurisdiction over seven districts, i.e. Shinan, Shibei, Licang, Laoshan, Huangdao, Chengyang, and Jimo, and three county-level cities of Jiaozhou, Pingdu and Laixi.

Qingdao is one of China’s first coastal cities opening to the outside world. As of today, the city has established sister-city relations or friendly-cooperative relations with 74 cities of other countries. More than 2,000 international trading companies, businesses and financial institutions have opened permanent branches or offices in the city. In 2018, Qingdao’s imports and exports totaled 531.61 RMB (yuan), and the paid-in foreign exchange direct investment rose to US$8.6 billion.

Several China’s top-ranking enterprises, such as Tsingtao Brewery and CRRC Sifang (high speed train producer), Haier, Hisense, Double Star, are headquartered in Qingdao, and their products are household names. The city has 123 of China’s “time-honored trademarks”.

The Qingdao port has shipping links with over 700 ports worldwide. In 2018, its cargo throughout topped 540 million metric tons. The Qingdao airport serves flights to 192 domestic and international destinations. In 2018, it handled 24.54 million passengers. The News Quoted