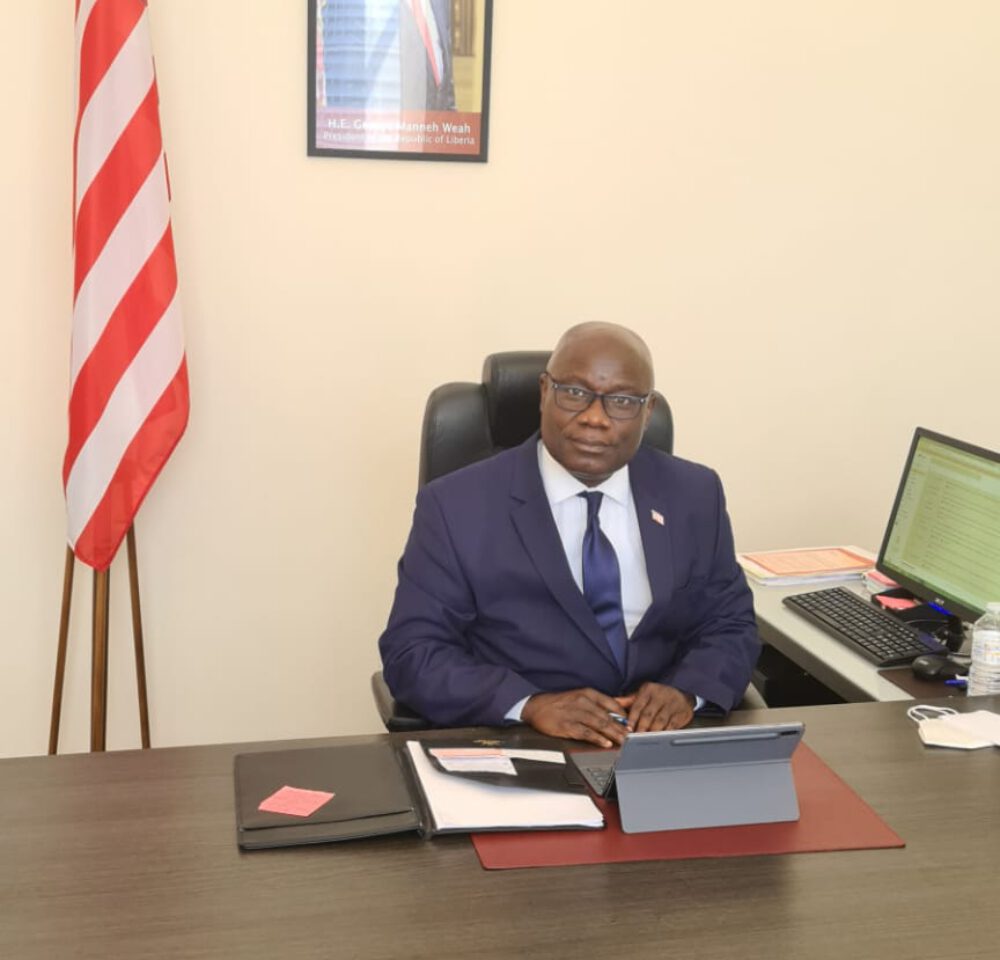 Ambassador Of The republic Of LIBERIA To The BENELUX Countries, And The EUROPEAN UNION
MEET THE AMBASSADOR OF THE EMBASSY OF THE REPUBLIC OF LIBERIA FOR BENELUX COUNTRIES

Ambassador Isaac Wehyee Nyenabo II is a career financial expert, diplomat, and Politician with over two decades of experience in the Public Service. He has served the Government of Liberia in various capacities. He was born August 6, 1964 in Tuzon, Grand Gedeh County, Liberia and married with eight children. He started his early education in Ziayee town, Gborbo, and moved to Zwedru, where he attended and graduated from Mike Tuleh Wilson High (Assembly of God High School) with a Diploma (1984).

Prior to his appointment as Ambassador Extraordinary and Plenipotentiary of Liberia to the Benelux Countries and the European Union, Ambassador Nyenabo served as Senior Senator of Grand Gedeh County from January 2006-2015, President Pro-Temp from January 2006-2009, and Chairman of the Senate Standing Committee on Banking and Currency (2009-early 2015).

As the Ambassador of Liberia to the European Union and the Benelux Countries, H.E, Dr. Isaac W. Nyenabo II directs Liberia’s economic and development diplomacy through our multilateral and bilateral engagements with development partners. At the Multilateral level, as Representative of Liberia to the Organization for the Prohibition of Chemical Weapon (OPCW), He co-sponsored and succeeded the approval of plenary in two bills; Alexis Calvany and Syria usage of chemical weapons (2020-2021) that were sponsored by the United States, UK, and EU. Ambassador Nyenabo also Chaired the African Group of Ambassadors in Brussels (GAAB) (March 2020- March 2021) and concomitantly ECOWAS Group of Ambassadors from August 2020- February 2021.

He previously served as Vice President for Agricultural Cooperative and Development Bank (1997 – early 1998) and Comptroller General of the Republic of Liberia, Ministry of Finance from 2003-December2005, His functions included, Managing the overall finances of the Country including Risk Management, Planning, Budgeting, Accounting, Financial Reporting, served as ‘’Class B Signatory’’ of the Government Account(s) and also Managed Government Financial Assets, etc.